Loading posts...
Home Main page What is municipalism and why is it gaining presence in Spain?

What is municipalism and why is it gaining presence in Spain?

In the last May 2015 municipal elections, the two major parties that have been ruling Spain since the Transition, lost nearly 3 million votes and over 4,000 councilors. The country understood the results as an evidence that the traditional bipartidism was begining to disappear.

In the last May 2015 municipal elections, the two major parties that have been ruling Spain since the Transition, lost nearly 3 million votes and over 4,000 councilors. The country understood the results as an evidence that the traditional bipartidism was begining to disappear. It was in these municipal elections when the citizen platform Levantemos El Puerto received more than 5,000 votes in a city of 90,000 inhabitants. The results also ended eight years of the Popular Party government through a coalition between PSOE, Levantemos el Puerto and IU (United Left).

There are two main emerging parties that have entered the political spectrum in Spain: Podemos and Ciudadanos. Contrary to what was expected, the results after the general elections in Spain last 2oth December, Ciudadanos obtained just 40 deputies and remains as the fourth political force far behind Podemos. Meanwhile, the party of Pablo Iglesias won 69 deputies and more than 5 million votes in all the country. The international press gave significant space to the 20D elections, especially highlighting the loss of the absolute majority of the Popular Party, the difficulty of forming a government without that majority, and the emergence of new parties. 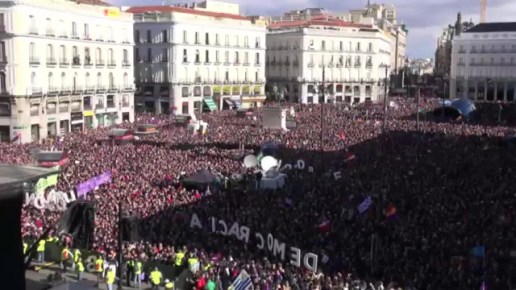 The Puerta del Sol in Madrid, during the ceremony We can known as “The March of Change” [Photo: Discasto via WikimediaCommons]

But apart from the achievements that both parties could achieve, it is noteworthy the movement that is occurring between the different political actors at national level, but especially at the local level. Why? Not only because the so-called “new parties” have been ruling during several months some of the most important cities in Spain, but because from the citizens’ platform there is hope to change the way of doing politics. They want to intensify the way the work from the bottom-up, from the people into the institutions. Municipalism is a system of political and social organization derived from the libertarian currents that tends to vindicate the autonomy to manage and administrative the political, economic and social dimension in municipalities.

What is ‘municipalismo’?
Municipalism is an idea of ​​political organization based on assemblies of neighborhoods, practicing direct democracy. It would be organized in a system of free communes or municipalities as an alternative to the centralized state.

In Spain, the municipalismo has its political origins in the 19th Century, with the republican and anarchist tradition. There were politicians like Pi i Maragall, president of the First Republic, and other politicians like Fernando Garrido, who contributed to the Spanish reform of government policy linked to citizen participation. Pi i Maragall theorized about federal decentralization in order to include members coming from different social status and coordinated the territorial decentralization in Spain. For him, Federalism was not only territorial administration and democratic decentralization, for Pi the real autonomy of the citizens came from the idea of “making coalitions while embracing diversity”.

“[…] Whoever thought existing institutions should define this pact based on an stablished authority, territory, borders, race or language, was wrong. According to Pi (who followed Proudhon), the federal pact was a bilateral and mutual agreement; in other words, a pact based on equal treatment, mutual sharing and equity. But if the basic actor inside the federalist cells were no countries, nations or states,  then what were they? Pi had the audacity to raise the possible bases of federal pact communal by using systems where social organization exceeded both the local authority and the system of private property. The communal pact worked by a collective agreement management of common interests. The basis of these agreements were not nationalist inspiration (rooted in tradition, race, language or cultural elements), but settled on a short-term political pact. Pi did not explore the consequences of these ideas, but opened the way for the libertarian movement […]”

Municipalism in the 21st century
The historian and activist Murrat Bookchin redefined the concept adapting it to the current capitalist context. He based this redefinition in the recovery of people’s direct democracy at the district and neighborhood levels. He proposed a “civic confederalism” to prevent provincialism in the cities and also a municipalized economy in opposition to the capitalist system. The “civic confederalism”  structure is based on a network of boards where the citizens elect directly those members. The members of these councils have a revocable mandates and are directly and immediately responsible for their decisions in the assemblies. Therefore, they have a purely practical and administrative function.

What is happening in Spain?
After the general elections in Spain last December, is still unknown if the proposals coming from citizens platform will be fully efective in the Spanish political  context. In the municipal elections, the Candidature of Popular Unity  (CUP) in Catalonia, mainly defined by its principles of nacionalism, anticapitalism and Euroscepticism, presented 163 candidates, more than twice the candidates presented in 2011.

Image of a meeting of the CUP, party whose performance has a great municipalist and assembly-based [Photo via anticapitalistes.net]

But now, after last Catalonian elections on September 27th 2015, Catalonia region faces again new elections after the CUP, refused to support the pro-independence leader Artur Mas. Mas is the main leader of the movement for independence from Spain in Catalonia, but the CUP vote unables him to become the president again. In September elections the CUP won 10 parliamentary seats with 336,375 votes.

Besides from Catalonian, there are other important regions in Spain where citizens are coming together to do politics from people to people. In the last episode of TalkReal, the participants debated about how it has evolved during the months of government the municipal candidacy Ahora Madrid in the capital city of Spain. The electoral program was developed including some demands and suggestions coming directly from citizens, who also stated what measures should have priority.

Celia Mayer, Councilor of Culture in Madrid, explains in the video that Madrid is now building an alternative way of doing politics through a process that begun with the 15M.

“On one hand we have taken the municipalists movements, those that have occurred in the streets of all Spain like Madrid, Barcelona, ​​Santiago, Cadiz and many others; and secondly, after the European elections, Podemos was a prove to tell Europe that there are other ways of doing politics away from idealism. We find a particular DNA in the municipal experience that comes directly from the social experience we’ve been gaining during the last recent years.”

In Spain, citizens demand new ways of doing politics, since corruption is a major concern of the Spaniards. This demand may mean the proposal of different models that redistribute power and restructure the institutions. Participatory democracy allows a greater involvement of citizens in policy-making processes by increasing public scrutiny of leaders. Thus, the process of holding accountable the leaders would come organically integrated within the own democratic structure.

This article was also published in United Explanations